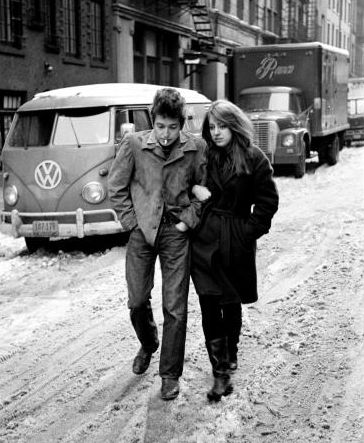 Wiki says about the cover:

The album cover features a photograph of Dylan with Suze Rotolo. It was taken in February 1963—a few weeks after Rotolo had returned from Italy—by CBS staff photographer Don Hunstein at the corner of Jones Street and West 4th Street inGreenwich Village, New York City, close to the apartment where the couple lived at the time.[95] In her memoir, A Freewheelin’ Time, Rotolo recounts how the photo came about spontaneously, and analyzes the significance of the cover image:

It is one of those cultural markers that influenced the look of album covers precisely because of its casual down-home spontaneity and sensibility. Most album covers were carefully staged and controlled, to terrific effect on the Blue Note jazz album covers … and to not-so great-effect on the perfectly posed and clean-cut pop and folk albums. Whoever was responsible for choosing that particular photograph for The Freewheelin’ Bob Dylan really had an eye for a new look.[96]

Critic Janet Maslin summed up the iconic impact of the cover as “a photograph that inspired countless young men to hunch their shoulders, look distant, and let the girl do the clinging”

Categories: All
Posted by redmondb on December 10, 2010